THIS WAS one double bill I Just had to see. I mean rock is so hard to find these days and there are good concerts every week but this had to be the one. And it was in enough ways to send 3,000 people home happy. May I say that again. Happy. Because everyone on stage and in the audience seemed to concur that playing and listening to music was just about the most enjoyable part of life (bar one). Which Is why when the AWB took an encore for their 25- minute version of ‘Heard It Through The Grapevine’ which gradually drew most of Kokomo on stage for a jam which no-one ever wanted to end as Hamish Stuart yelled and screamed falsetto improvisations just mad to see what ultra-together, been-rehearsing-it-for-years responses Frank Collins and Dyan Birch would come up with next. 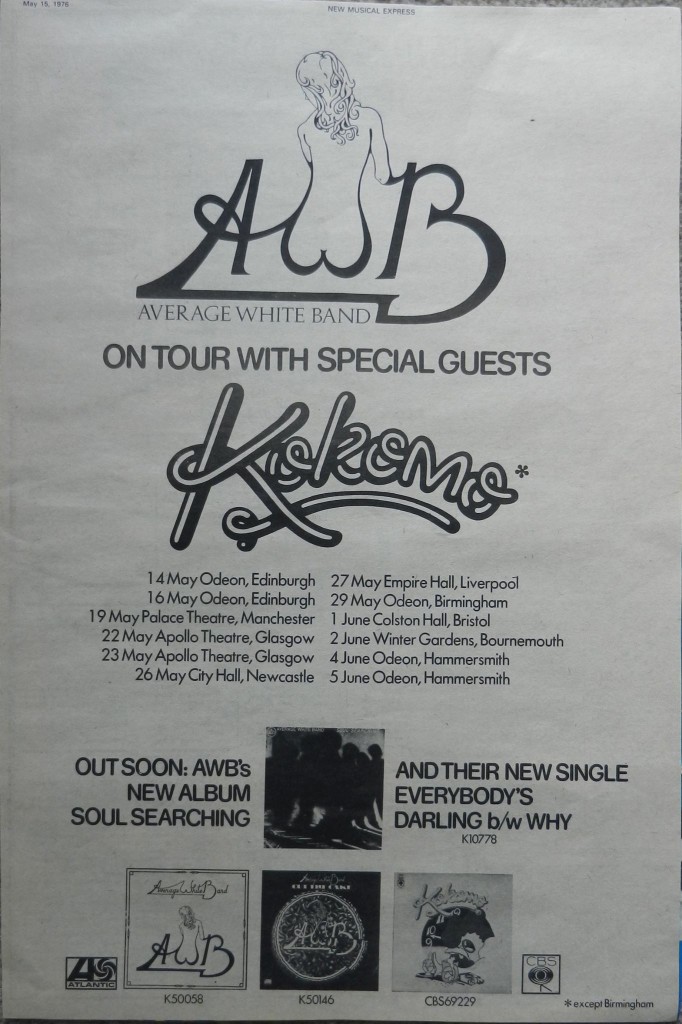 So that was the Average White Kokomo Big Band. Earlier on we had been pleased to join Kokomo and the Entire Audience Percussion Section. This was a segment of their epic version of Aretha’s one-line chant ‘I love you babe with everything I feel In me’.

Frankie stepped out to the end of the catwalk to tell the girls to step this way over the funky rhythm section, a natty disco double beat, and when that was in motion he got the boys laying another pattern across it. Easy it was not, achieved it was, result was that our counter-rhythms became a genuine part of the music, we were throwing our hearts and bodies into participating in the music and everyone felt good. May nobody ever say “You can clap your hands to this If you want” to me again.

Kokomo’s playing was simply up to their usual immaculate standard but I’ve never seen them so full of confidence and not just belief but in-the-bone knowledge that they are superb.

Well, the Average Whites were In a kind of follow-that situation but that was inevitable when they let Kokomo on the tour.

I don’t think they are quite as good as Kokomo (for Instance In their limited ability to improvise vocally and Instrumentally – excepting Duncan and Ball) but they are excellent and I shall be eternally grateful for side one of the ‘AWB’ album. Star turns from It here were “Person To Person”, Hamish’s vocal emphasising the exotic and erotic, and ‘Work To Do’, which came on big and beautiful, swinging fit to cause Count Basic a slow smile, and patently switching between wild screams and tight harmony chants. Of two upcoming album numbers they played ‘Goin’ Home’ was an average piece of cake and “I’m The One That Wants You” a hot addition to their set with the vocals taking acute and perverse lines over punchy brass riffs.

They were very good and they particularly surprised me with their tenderness in their ballads “Cloudy” and “If I ever lose this heaven” A funky good time was had by all. Now girls, you clap this, right, and boys….