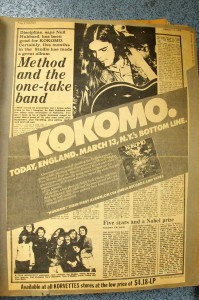 A nervous but inspired Kokomo made their American debut at the Bottom Line Club on Thursday evening, supporting a polished but relatively uninspired Chambers Brothers.

The English band (watched, incidentally by Bryan Ferry and John Whetton from Roxy and Hamish Stuart and Alan Gorrie from the Average White Band) played before an audience comprised mainly of Columbia executives and personnel. The company, it is said, has put an awful lot of faith in the group – and plenty of dollars.

Kokomo are reduced to nine for the US tour, Mel Collins having been contracted to appear with Alvin Lee’s new band which is touring elsewhere in America. But the absence of reeds didn’t seem to matter, as the band stormed through a set with plenty of nuts and fire.
Introduced on stage by Charlie Brown, a top black New York dj, Kokomo soon showed themselves to be strong competition for the Average Whites. While the AWB are more restrained In their approach to soul, Kokomo tear into numbers with less precision but an obvious enthusiasm for the music they are interpreting. Nervous glances between the musicians led to occasional downfalls, but Tony O’Malley on keyboards did a creditworthy job in keeping all nine musicians on the right path. 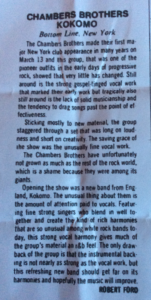 “Opening the show was a new band from England, Kokomo. The unusual thing about them is the amount of attention paid to vocals. Featuring fine [sic – maybe they meant 5] strong singers who blend in well together and create the kind of rich harmonies that are so unusual among white rock bands today, this strong vocal harmony gives much of the group’s material an r&b feel”