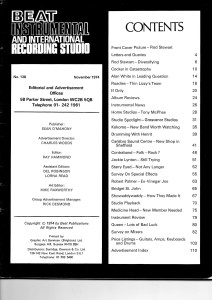 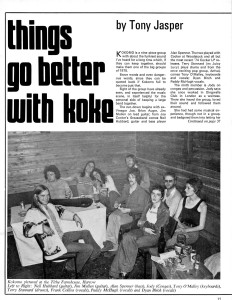 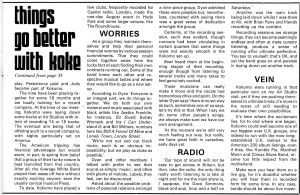 KOKOMO is a nine-piece group with about the funkiest sound I’ve heard for a long time which, if they can keep together, should make them one of the big groups of 1975.
Brave words and even dangerous words, since they can be quoted back if Kokomo fail to become just that.
Eight of the group have already seen, and experienced the music scene, in itself helpful for the personal side of keeping a large band together.
The run-down begins with ex Vinegar J00, Brian Auger, Jim Mullen on lead guitar; from Joe Cocker’s Greaseband comes Nell Hubbard, guitar and bass player Alan Spenner. The two played with Cocker at Woodstock and all but the most recent ‘74 Cocker LP re leases. Terry Stannard (ex Juicy Lucy) plays drums and from the once exciting pop group, Arrival, comes Tony O’Malley, keyboards and vocals; Dyan Birch end Paddy McHugh vocals.
The ninth member is Jody on congas and percussion. Jody says she once worked in Dingwalls Club in London as a waitress. There she heard the group, loved their sound and followed them around.
She had had some musical experience, though not In a group, and badgered them into letting her play. Persistence paid and Jody became part of Kokomo.
The nine have been playing together for some 18 months and are busily looking for a record company. At the time of our meeting, Kokomo were laying down some tracks at Air Studios with intent of recording 14 or 15 tracks. The eventual aim being that of offering such to a record company, with sights particularly set on America.
The American tripping has financial advantages but would seem, in part, to spring from belief that a group of their funky nature is best launched from that country. After all, the Average White Band played their asses off here without exactly exciting anyone, save the usually cynical musical Press.
To date, Kokomo have played a few clubs, frequently recorded for Capital radio, London, made the one-day August event in Hyde Park and some larger venues, like The Roundhouse.
WORRIES
As a group they maintain themselves and help their personal financial worries by various session commitments. That they could come together arose from the lucky fact of each finding their own contracts running out. Some of the band knew each other and respective musical tastes and where they would like to go as a new set up.
According to Dyan ‘Everyone is an Integral part we do things together. We do both our own material and music associated with black artists like Aretha Franklin, for instance, So Swell; Bobby Womack and his I Can Understand It and Bill Withers, numbers here like Still A Friend Of Mine and Lonely Town, Lonely Street.
‘We’re not out and out black music, such is an obvious impossibility, but we play as close as possible.’
Dyan and other members I talked with prefer to see their sound as simply ‘music’, and often with plenty of melody. Labels, they feel, can be discounted.
Asked about the possible problems of personal relations amongst a nine-piece group, Dyan admitted these were possible but nevertheless, countered with saying there was a great sense of dedication amongst the group.
Certainly, at the recording session, such was evident though rumours had been circulating in certain quarters that some things were not exactly smooth in the Kokomo set-up.
Beat heard them at the beginning stages of their recording enough though from listening to several tracks and many takes to feel genuinely excited.
Those musicians can really make it move and the vocals had tremendous drive end spirit. On the latter Dyan says there is no set way as such, sometimes one of us says, let’s try this or that. When I say we do some other people’s songs, we always make sure we have our own arrangement.
‘At the moment we’re still very much feeling our way, but really, we have great faith in ourselves, early days yet.
RADIO
‘Our type of sound will not be easy to get across in Britain, but then, take the radio, the only thing really worth listening to is late at night and for me the main show Is, I suppose, the Dave Simmons, blues and soul, hour and a half on Saturdays.’
Anytime was the main track being laid down whilst I was there at Air, with Brian Ferry and friends recording up the corridor.
Recording sessions are strange things, they can become seemingly endless and often at mere cursory listening, produce a sense of running after ultimate perfection. You say to yourself, that’s OK, end yet the band goes on and persists in laying down yet another track.
VEIN
Kokomo were running in that particular vein on my Air Studio visit, yet if they are pushing themselves to ultimate limits, it’s more In the sense of still needing to evaluate their own possibilities.
It’s here where the excitement lies, for to end where one began, Kokomo could well become one of our biggest ever U.K. groups, one indeed to run with the now long-established U.K. visitors to the American 200 album listings, even if they, like Humble Pie, Manfred Mann and Climax Blues Band, receive too little respect from the motherland.
Make sure you hear them on a live gig, for it’s doubtful whether you will hear them in recorded form for some time. In any case, bands should be about live music.

Thanks to Doug Dean for finding this