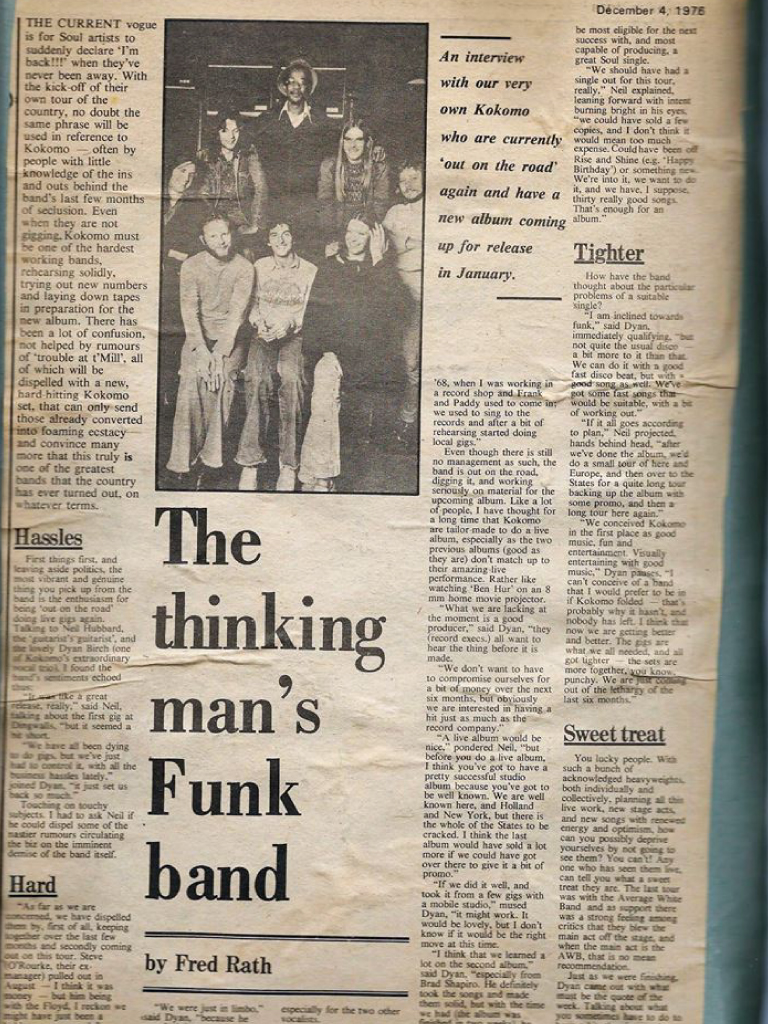 THE CURRENT vogue is for Soul artists to suddenly declare ‘I’m back!!!’ when they’ve never been away. With the kick-off of their own tour of the country, no doubt the same phrase will be used in reference to Kokomo – often by people with little knowledge of the ins and outs behind the band’s last few months of seclusion. Even when they are not gigging, Kokomo must be one of the hardest working bands, rehearsing solidly, trying out new numbers and laying down tapes in preparation for the new album. There has been a lot of confusion, not helped by rumours of ‘trouble at t’Mill’, all of which be dispelled with a new, hard-hitting Kokomo set, that can only send those already converted into foaming ecstasy and convince many more that this truly is one of the greatest bands that the country has ever turned out on whatever terms.

Hassles
First things first, and leaving aside politics, the most vibrant and genuine thing you pick up form the band is the enthusiasm for being out ‘on the road’ doing live gigs again.
Talking to Neil Hubbard, the ‘guitarist’s guitarist’, and Dyan Birch (on of Kokomo’s extraordinary vocal trio), I found the band’s sentiments echoes thus:
“It was a great release really”, said Neil, talking about the first gig at Dingwalls, “but it seemed a bit short.
“ We have all been dying to do gigs, but we’ve just had to control it, with all the business hassles lately,” joined Dyan, “it just set us back so much”.
Touching on touchy subjects, I had to ask Neil if he could dispel some of the rumours circulating the biz on about the imminent demise of the band itself.

Hard
“As far as we are concerned, we have dispelled them by, first of all, keeping together over the last few months and secondly coming out on this tour. Steve (O’Rourke, their ex-manager) pulled out in Augsut – I think it was money – but him being with the Floyd, I reckon we might just have been a hobby – we were left hanging around. We were hanging around beforehand for a couple of months because he thought we should concentrate on the album without doing gigs. When he pulled out we were left at square one again. It has been really hard.

“We were just in limbo, “ said Dyan, “because he wasn’t doing anything with us”.

Not only are they still together, one of the ex-members of Kokomo has rejoined. Paddy McHugh, one of the original singers with Dyan and Frank Collins, has brought renewed power with his return,  especially for the other two vocalists.

“It’s really great, ” enthused Dyan, “a real boost of energy – that little bit of extra excitement which we missed. Sian (the singer who had replaced him) was very good, but I guess it’s that thing that Paddy has been there for years, and that counts. We started in 68, when I was working in a record shop and Frank and Paddy used to come in; we used to sing to the records and, after a bit of rehearsing, started to do local gigs.”
Even though there is still no management as such, the band is out on the road, digging it, and working seriously on material for the upcoming album. Like a lot of people, I have thought for a long time that Kokomo are tailor made to do a live album, especially as their two previous albums (good as they are) don’t match up to their amazing live performances. Rather like ‘Ben Hur’ on an 8 mm home movie projector.
“What we are lacking at the moment is a good producer, “ said Dyan, “they (record execs) all want to hear the thing before it is made.
“We don’t want to compromise ourselves for a bit of money over the next six months, but obviously we are interested in having a hit as much as the record company.”
“A live album would be nice,” pondered Neil, “but before you do a live album, I think you’ve got to have a pretty successful studio album, because you’ve got to be well known. We are well known here, and Holland and New York. But there is the whole of the States to be cracked. I think the last album would have sold a lot more if we could have got over there to give it a bit of promo.”
“If we did it well, and took it from a few gigs with a mobile studio,” mused Dyan, “it might work. It would be lovely, but I don’t think it would be the right move to this time.
“I think that we learned a lot on the second album,” said Dyan, “especially from Brad Shapiro. He definitely took the songs and made them solid, but with the time we had (the album was finished in two weeks), he never put the icing on the cake as it were. We really needed an extra week to listen to the tracks and see what we wanted to do with them.”

Enough of the past. With so many Soul outfits, both American and British, getting into the charts with single, Kokomo must be most eligible for the next success with, an d most capable of producing a great soul single.
“We should have had a single out for this tour really,” Neil explained, leaning forward with intent burning bright in his eyes, “we could have sold a few copies, and I don’t think it would mean too much expense. Could have been off Rise and Sine (e.g. “Happy Birthday”), or something new. We’re into it, we want to do it, and we have, I suppose, thirty good songs. That’s enough for an album.”

Tighter
How have the band thought about the problems of a suitable single?
“I am inclined towards funk, “ said Dyan, “immediately qualifying, “but not quite the usual disco – a bit more to it than that. We can do it with a fast disco beat, but with a good song as well. We’ve got some fast songs that would be suitable, with a bit of working out”.
“If it all goes according to plan,” Neil projected, hands behind head, “after we’ve done the album, we’d do a small tour of Europe, and then over to the States for quite a long tour backing up the album, and then a long tour here again”.
“We conceived Kokomo in the first place as good music, fun and entertainment. Visually entertaining with good music,” Dyan pauses, “I can’t conceive of a band that I would prefer to be in if Kokomo folder – that’s probably why it hasn’t, and nobody has left. I think that now we are getting better and better. The gigs are what we needed, and all got tighter – the sets are more together, you know, and punchy. We are just coming out of the lethargy of the last six months,”

Sweet Treat
You lucky people, with such a bunch of heavyweights, both individually and collectively, planning all this live work, new stage acts, and new songs, with renewed energy and optimism, how can you possibly deprive yourself by not going to see them? You can’t! Anyone who has seen them can tell you what a sweet treat they are. The last tour was with the Average White Band and as support there was a strong feeling amongst critics that they blew the main act off the stage, and when the main act is AWB, that is no mean recommendation.
Just as we were finishing, Dyan came out with what must be quote of the week. Talking about what you sometimes have to do to have a hit, the six month wonders, and the fashionable fads that populate the music world, and the day when Kokomo will be sitting at the top of the pile. ” I still think, ” she said, laughing, “that talent will come back as a gimmick. It’s got to, hasn’t it?”